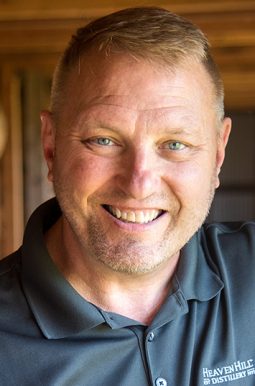 Bernie Lubbers is the Global Brand Ambassador for Heaven Hill Distillery. A veteran comedian of 25 years and an accomplished author, he is not only entertaining, but also extremely knowledgeable about Bourbon. Dubbed The Whiskey Professor, he can tell you more about Bourbon than you ever thought possible. He has been named Global Whiskey Ambassador of the Year by Whisky Magazine at Whisky Live in 2009, 2012 and 2016.

His draw toward Bourbon is natural. His grandfather was one of 13 saloon keepers who started the Falls City Brewing Company in Louisville, KY back in 1905. His father also worked there for 45 years. “Before you make whiskey, you’ve got to make beer,” Bernie says.

Each year, he travels over 100,000 miles educating people about Heaven Hill’s whiskeys including but not limited to Evan Williams, Elijah Craig, Larceny, Bernheim and Henry McKenna. In addition to traditional account trainings and consumer events, Bernie also performs his one-of-a-kind show “The Evolution of Bourbon”, which walks people through the history of Bourbon through music. He also educates consumers on how to read a whiskey label and what to look for before making a purchase. When he’s home, he spends time at the Bourbon Heritage Center in Bardstown, Kentucky where he learns first hand from Craig Beam and Denny Potter, Co-Master Distillers for Heaven Hill Distillery.

Bourbon Whiskey – Our Native Spirit is Bernie’s recently published book on Bourbon. The book includes a comprehensive overview on Bourbon including how it’s distilled and aged, why it was distilled, and how it became aged in the first place. It is published by Blue River Press and now available nationwide at www.whiskeyprof.com and select book stores nationwide.