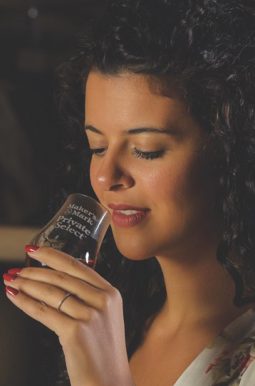 Alexa Amendolagine is a native New Yorker and Diplomat for the Maker’s Mark Distillery in Loretto, KY. She utilizes her passions for whisky and storytelling while focusing on bourbon education and community outreach. Since joining the Maker’s Mark team over two years ago, she’s helped build partnerships with Broadway productions, an MLB team, and numerous non-profits and whisky clubs. While based in NYC, she makes regular trips to Loretto to leads bars, retailers, and consumer enthusiasts alike in creating their own custom barrel of Maker’s Mark Private Select.

Before coming to Maker’s Mark, Alexa studied classic cocktail construction and explored the influence of culinary tradition on the bar industry. In her work for a nationality hospitality group, she traveled to open fourteen bars in six cities in three years. When not at work, Alexa can be found traveling, taking in a play, or relaxing with her family and a neat Maker’s Mark Cask Strength.

In an effort to ensure the well-being and health of our attendees, exhibitors and staff, we have made the difficult decision to postpone WhiskyFest™ New York until December 8, 2020. We are working closely with the hotel to implement health and safety protocols that will ensure a safe and enjoyable experience while complying with the guidelines of local and state authorities. If you purchased tickets to the original event, please check your email for more information about your tickets.

We look forward to sharing a dram with you soon!